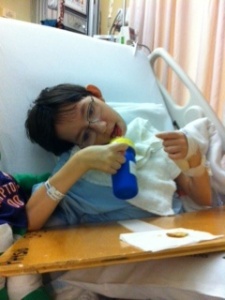 Deane having his first drink in 10 days.

I am not prone to happy dances. But then again, it’s been a rather unusual 10 days.

What had me grooving by myself in my son’s hospital room was the sight of Deane slowly, stiffly raising his cup to his mouth and sucking back some milk.

After a rough night in which Deane had been awake since 3 a.m., I had tried to get him to drink from his cup in the morning. He wouldn’t or couldn’t close his mouth on the straw. The occupational therapist backed out of the room and said she would let the two of us work on it.

In the afternoon, I decided to try to recreate the conditions that Deane usually has when drinking. With a little innovation, I took the board that is designed to support Deane’s legs in the wheelchair and put it on his lap. With this “tray,” Deane was able to hold his cup to his mouth long enough to wrap his lips around the straw and drink.

Bring on the happy dance.

His drinking wasn’t fast but it was enough to wash down a cracker that he was munching  down with characteristic efficiency.

Now he has a weekend to become more efficient so that Monday he can prove to the OT he can eat and drink safely.

At the end of the day, the nurse told me the stool cultures – which took only 24 hours to grow – were negative.

It’s hard to think with a better way to end the week.

« What next?
The power of positive distractions »